It’s not an accident that Mary Magdalene is returning in October. October—the 10th month of the year.

The Magdalene is returning to get us ready for 2020, a sacred year of collapse and rebuilding. And she’s returning not just in any form, but as the Black Madonna herself.

This intensive has turned out to be quite a surprise. On oh so many levels.

There’s the Magdalene piece—a mystery wrapped in an enigma and buried in a fog.

Who was Mary Magdalene? What did she know that the male disciples did not? Why was she ignored, silenced, hidden by the patriarchal leaders of the church? What is her true story and why are we so hungry to know her two thousand years after her mysteriously veiled life?

If that weren’t enough, there’s the Black Madonna piece—an ancient goddess mystery if ever there was one.

What is this symbol of the first, the original, the true black mother that cannot be silenced? Why are there thousands of black madonnas in every corner of the world? Who is the Black Madonna? And why, like the Magdalene, is she resurfacing now?

And then, there’s the Astrology piece.

Astrologers have been saying that everything we’re going through is leading to 2020, the year that ushers in the collapse of all patriarchal systems.

I know that sounds scary. I know. But look, it has already begun. Millions pouring into streets around the world for climate science. Teenage female environmental activists nominated for the Nobel Peace Prize. Jeffrey Epstein’s financial walls crumbling to reveal trafficking for the rich and powerful. Oh, the tales that dead man will tell! Total chaos in the British parliament. It’s wild to watch but not much different from my own country where the constitution itself is in danger.

And finally, there’s the Numerology piece, a piece I always turn to for clarity and direction.

2020 is a 4 year: 2 + 2 = 4. Four asks us to create a firm foundation for a healthy life. But there’s even more. Look at 2020 and you can see the 22. The master number of 4. Twenty-two is “the master architect.” The original Hebrew alphabet had 22 letters, so 22 is completion, perfection, wholeness, bringing heaven to earth. (The Secret Science of Numerology.)

She is the tower. Magdala means tower. She is the tower who embodies Jesus’ radical teachings of love. She is the one—perhaps the only one—who understood him and his teachings. Her tower of love will be our beacon through the storms of 2020. No wonder she’s coming now to help us get ready.

One more thing about 2020. If you add twenty to twenty you get 40. And 40, as you know from bible stories and stories of other mystical traditions is the number of mystical completion: 40 days and 40 nights fasting in the desert, 40 years wandering in the desert… Forty is a very sacred number pointing to a journey--a difficult one perhaps, but a journey to wholeness.

I wanted another intensive with Mary Magdalene and Meghan Don, for sure. So did everyone in the first Mary Magdalene intensive, Praying with and as Mary Magdalene. And in perfect synchronicity, there was only one month it could happen. October. So Meghan and I put it on our calendars for October 7-14-21.

At the time I didn’t pay attention to the fact that we would gather in October. But of course, it’s perfect.

October is the 10th month of the year. The 10 reduces to a 1. New beginnings. We have completed the cycle of the 1 through 9 that began in January and ends on these final days of September. This is a precious weekend to start your year end review.

Now a new cycle begins. Not with the strong first step of a 1 month in January. No, it begins now, while still in the final quarter of the waning year. The new year reveals herself in October with a hint, a whiff, a whisper of the essence of the year to come.

Something will be revealed to you in October carrying the seed of your 2020.

So as 2020 devolves into chaos and collapse, we are called to be the ones who stay calm, the ones who keep our feet on the ground thanks to the foundation of our mystical practices, the ones who are unafraid as they follow the guiding light of Mary Magdalene.

We are invited to be the ones who find the new seeds of love, and begin the sacred work of building a new kind of structure. And it won't be a power structure—we’ve seen the harm rampant power can do. It will be a reverence structure.

Who better to free us from any shackles of fear and guide us safely home but Mary Magdalene, the tower of love who lived through the worst hate can inflict.

Surely, she mourned, she wailed, she wept. But we know she gathered the frightened disciples and filled their hearts with the strength and power of love to go out and build a new structure built on love.

That’s now our call in 2020. And Mary Magdalene as the Black Madonna, as the tower of love will be our guide.

Mary Magdalene as the Black Madonna

Watch the video Meghan and I made to get a taste for the deep communion we will all experience with Mary Magdalene in her 3 black mother faces of guardian, justice, and healing--everything we need to create the new structure of reverence and love. 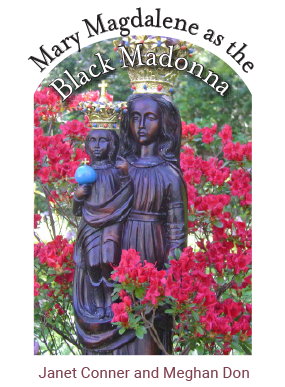 We open Monday, October 7 at 7pm eastern, and meet for 3 Mondays. Everything is recorded so don't be concerned if you can't be with us live.

Details, schedule, and registration are all on the intensive page.

We were over 80 in the first Mary Magdalene intensive plus 25 more who purchased the intensive on demand, so this prayer intensive is filling quickly.

Mary Magdalene as the Black Madonna

to opening to receive the strength and grace of the Tower of Love in October,