There is always a wild mystical adventure behind my prayer intensives. I trust you know by now that I don’t try to think up topics to teach.

Which is a good thing, because I don’t actually teach anything.

Because the Theatre of the Miraculous is alive.

The best way I can describe it is that when we gather in this pray-filled, heart-directed, sacred way, we are transformed into both individual and collective mystical containers for the Sacred Feminine.

It’s She who whispers in your ear. She who nudges you toward healing and hope. She who infuses you with the courage, grace, and guidance you need to live the life you actually long for.

Not the plastic life all those self-help books told us we were supposed to want. A real life. A holy life. A whole life.

And so, I have a story to tell you today. A wild, magical, outrageous story. A story that still sets my heart to dancing.

I want to tell you the story behind the radical prayer intensive with Perdita Finn that opens on March 22.

The intensive is called The Long Story of Our Souls.

Until I started working with Perdita, I not only didn’t know the long story of my soul, I hadn’t even thought to ask myself if I had one.

But I see now that asking “What is the long story of my soul?” might be the most important and freeing question of our lives.

If you’ve been reading these Notes from the Field for a while, you know that in November 2019, I very reluctantly started saying the rosary after reading Perdita Finn and Clark Strand’s book The Way of the Rose. But this wasn’t the rosary of my childhood. I was shocked and thrilled to discover that the rosary, once you strip away all the patriarchal overlay that sucks all the juice out of it, is actually an ancient and delicious Goddess-summoning mystical prayer practice.

As I spoke the rosary prayers as my heart wanted to say them, I could feel myself drop almost immediately into the mystical theta brainwave state—that magical threshold between worlds that I’ve been exploring for 25 years.

I was so enamored of this ancient prayer, that I hosted Perdita and Clark in the first-ever rosary prayer intensive in March of 2020. By the time we finished, quarantine had descended and we all had this mystical magical prayer practice to carry us through.

That June, Perdita announced she was going to invite a small group of 12 people to join her very first class on working with the dead. My whole body vibrated with a massive yes.

I didn’t have a clue what I was signing up for, but it felt like the essential next step in my mystical life. Little did I know I was about to take, not a step, but a massive leap into the long story of my soul.

The leap began just a few weeks later on August 2, when Rabbi Tirzah Firestone sent an endorsement for the relaunch of Writing Down Your Soul that began:

I was ecstatic. My agent, however, was not. She said I couldn’t let anyone call me a witch. She said I’d lose my readership. I said, Oh for heaven’s sake, I’ve had to totally redefine prayer; I can surely redefine witch. After arguing for days, I realized she couldn’t see me—the real me, the mystic witch me—and I began to work on an email to end our relationship.

In dead class twelve days later, Perdita told us to watch Groundhog Day and notice how Bill Murray keeps stepping in the same icy black puddle and waking up to yet another February 2. After repeating this pattern over and over, he resigns himself to living in this insane loop and decides to do something that would make him happy. He decides to take piano lessons. Playing music sparks some joy in him. And the beautiful girl begins to notice that spark.

One day, as he’s walking in the cold, he looks down, sees the puddle, and steps over it. 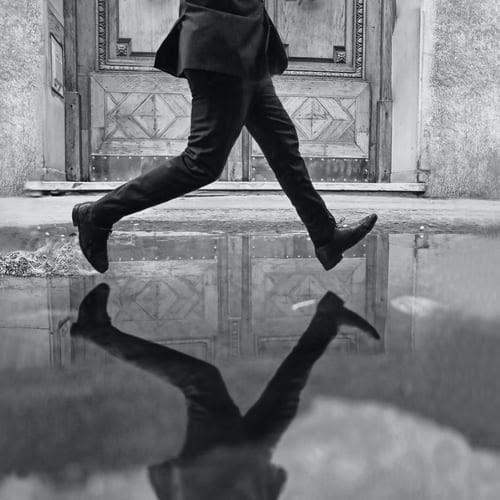 Perdita explained that this is the greatest movie on reincarnation. She ended class leaving us with an assignment to find our own icy black puddle.

And we could finally step over it.

Well, that sounded thrilling. I just had one problem. I had no idea what my puddle was.

Class ended and I started to turn off the computer to make dinner when my whole body screamed: No dinner for you until you sit down and finish that email! Took me an hour, but when I felt the email was complete, I smiled, pressed send, and went downstairs to make myself a celebratory dinner.

The next morning in deep soul writing I thought I better ask my Beloved Sophia about my puddle, but before I could finish writing the question, I burst into tears.

I realized that without knowing or naming my puddle, I had taken a running leap over it.

My old black icy puddle in this lifetime and in countless lifetimes was to Allow Someone to Silence Me. Firing my agent ended a long long chain of being silenced.

Taking a running leap over that very old, dark, icy black puddle cleared the path to a whole cascade of mystical adventures.

We open Tuesday, March 22 and meet for 4 Tuesdays (Wednesdays for the UK Watch Party) and close with a sacred celebration on Sunday, April 16.

Be sure to watch the delicious video Perdita and I made for you and read the full description of this radical intensive. An adventure you can find nowhere else.

It's all on this page on my site:

The Long Story of Our Souls

What is the long story of your soul?

But Perdita, who has been working with the dead for thirty years, has developed a mystical exploration in 4 parts that will awaken your inner ears, so you can hear the sacred whispers of your soul inviting you to jump, jump, jump over the icy black puddle that has held you captive for lifetimes.

to holding hands in the Theatre of the Miraculous, taking a deep breath, and leaping together into the breathtakingly beautiful long story of our radiant souls,

Come hear me read Notes from the Field on YouTube. I love speaking directly to you and Hyldemoer loves chiming in.

Spread the love
Posted in Mystical and tagged Long Story of Our Souls, Perdita Finn, prayer artist, redefine prayer, Return of the Witches
← Can prayer reach “the good king”?Perdita Finn pierces the veil on reincarnation →