Five we know is change, divine change, feminine sacred change moving in and through and as us to help heal our wounded world.

To understand the possibility inherent in this particular week in this 5 year, let's look a little more deeply into the numeric vibration of 31.

3 + 1 = 4. Four is a solid foundation, like the four legs of a chair. But don’t stop there. To understand how to create that strong foundation, let’s look at how the 3 dances in communion with the 1.

Three is the trinity, the divine child born of the sacred marriage of the father and the holy mother.

It’s a recurring image in every spiritual tradition.

We hear it in the Christian tradition as:

“Glory be to the father and to the son and to the holy spirit as it was in the beginning, is now, ever shall be, world without end.”

I grew up saying this prayer, so I assumed it was a Catholic prayer. But last Winter Solstice, Rabbi Tirzah said something just like it in our Exhale event. My head spun and I stared at her on zoom. What did you just say? Gosh, but that sounds familiar…

As I digested the words, I thought, of course, it’s originally a Hebrew prayer that Jesus would have said. No wonder it got picked up and morphed into the Christian canon.

This trinity is far, far older. And has nothing to do with any of our patriarchal religions.

And I was asked to dig back beyond recorded history to find its origin.

Now, this would not ordinarily be something I would take on, but, as it turns out, I had no choice.

In April, I gave myself a Tarot consultation with Sabin Bailey hoping it would help me create The Return of the Witches event.

As the cards revealed their song of insights and memories, Joan of Arc kept showing up. She did indeed help me see the deeper purpose of the pilgrimage.

But then, as the reading was ending, she gave me an assignment: “Find and name the Female Trinity.”

Now, when the greatest Mystic Witch of all time tells you to do something, you have only one thing to say:

So, even though my heart stopped when I heard her request, I still nodded. I think my head bowed in assent before my brain could speak a word of caution. Perhaps sometimes a silent nod is a more powerful yes than a spoken word. It certainly felt like a seal to me.

I stared at Sabin on the screen in shock. Sabin said, “Don’t worry, Jeanne said she will come to you in the dream time.”

And she did. Oh, did she ever. Three nights in a row. Zero sleep. Just a slow trickle of possibilities that eventually revealed the original trinity, the trinity before all religions.

The trinity everyone on earth loved and honored for tens of thousands of years. The feminine trinity that lives in the earth. In the plants. In the animals. In the rocks. The Female Sacred trinity that expresses her beauty in bodies, female bodies.

On the morning of the 3rd day, I woke with the final words scribbled on the yellow pad beside me. I took the words into soul writing and stared at them in awe.

The simplicity surprised me. In these three very short lines, there is no trace of dogma, theology, rules, or laws. There is only a holy acknowledgment of what has always been true, and will always be true, no matter what any patriarchal religion tells us.

The Female Trinity is simply:

She who was
She who is
She who ever shall be

And I realized I'd heard this before. And then I remembered. Of course! These are the words carved on the entrance stone to Isis' temple in Sais Egypt:

I, Isis, am all that has been, that is or shall be.

I dare say Jeanne d’Arc was rather pleased. It was she who led me to an image in Witches and Pagans by Max Dashu of a Merovingian triple-headed dragon or serpent dated around 600 CE in France. I couldn’t take my eyes off it but didn’t know why.

Once the words came, I realized why I had been so compelled to look at the symbol of the original trinity.

This triad symbol is everything to me, so I gave the drawing to Apollo Moonfire in Seattle who converted it into a CAD image and sent it to Jennifer Gandia of Greenwich St Jewelers in New York. Under her guidance, her team created this breath-stopping gold image with emerald eyes! 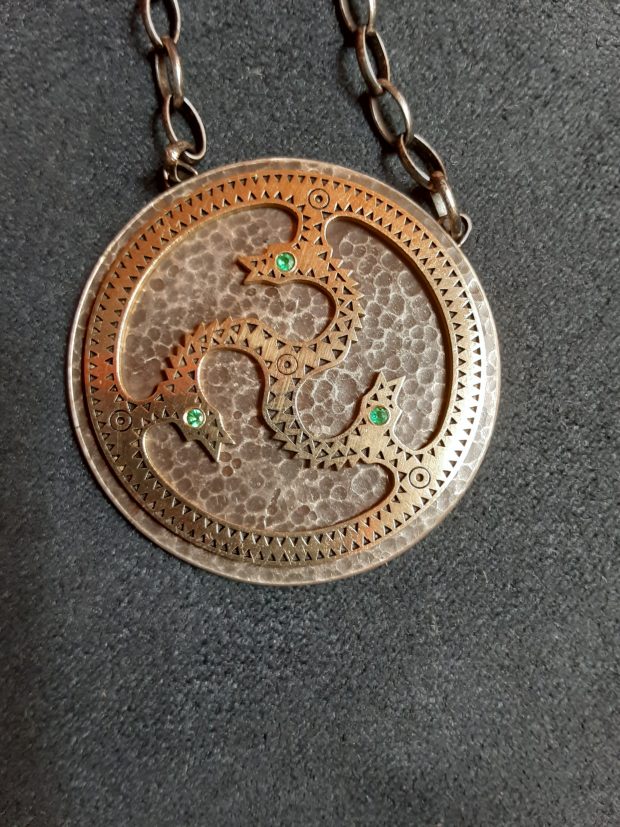 But the back holds an even deeper secret. The words are there in a wild ancient-looking font, floating around the crest the King of France (of Merovingian descent) gave her family. 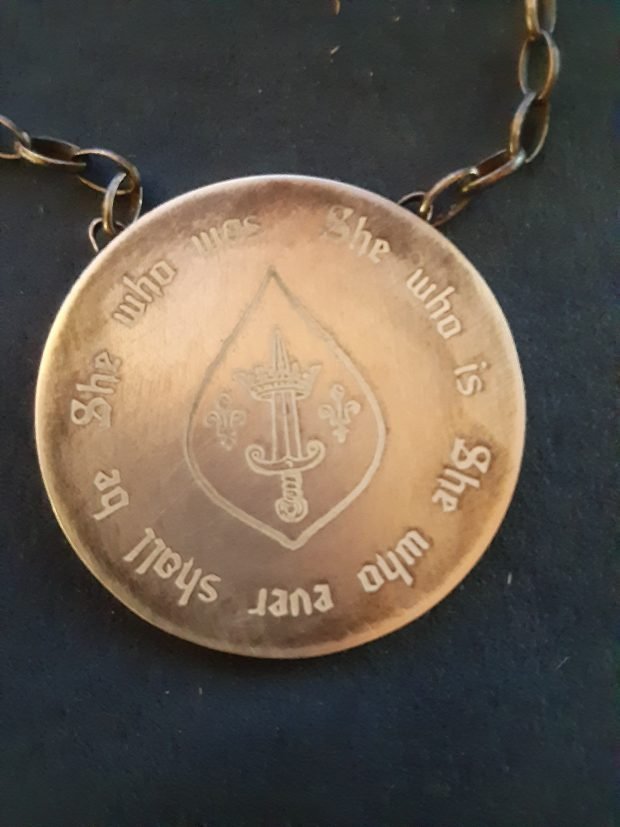 I wear this amulet every day. Perhaps, you recall from a previous newsletter that Queen Boudica demanded that we:

I put my Jeanne d’Arc Female Trinity Amulet on every morning during my full-body anointing, and press it against my heart as I finish the anointing.

Boudica, I want you to know that I have searched for my truth, named it, wear it, and plant it at the center of my being every day.

So that’s my 3, my holy 3, the center of my life. And, I must confess, things have been moving at Her speed—the speed of Love ever since.

1 is the initiator, the new path, the new step in your own individuation. And as you can see just by looking at the 1, she stands alone. She’s independent.

It takes courage and strength to stand for yourself and your truth in a patriarchal world that relishes judging and denouncing anyone who dares step out of the pack. Just look at how the world has attacked Simone Biles this week when she had the courage to put herself and her well-being before America’s voracious hunger for gold.

So, I guess I should have expected a new beginning, a new seed, a new call to create something radical.

But I didn’t see it coming.

Last Sunday, the members of The Return of the Witches had the 2nd of our 3 discussion gatherings.

There’s no agenda, we just show up and listen to one another talk about how the pilgrimage is changing us. And, make no mistake, it is changing every single one of us. During the discussion, one woman in Switzerland begged me to keep creating events like the pilgrimage. After the gathering ended, she and I had a brief private exchange on Facebook.

“I have been profoundly opened by this work, it has culminated all my years of clearing and letting go. Now I can be. I am. In this group, I have reunited a Memory of my sisters.”

“We have all been one another’s sisters and mothers."

She said an owl outside hooted her confirmation! She then wrote, “This group is rife with magic” and without thought, I answered “The New Matriarchy,” then amended it immediately to “We Are the New Matriarchy.”

I could feel the truth of those words landing in my body, so I did the numbers and when I saw 108, the same vibration of The Return of the Witches, I knew this is the name of a major event in 2022.

But all I had was the seed.

It was a lot, but I had more to learn before I could start creating anything.

All Monday night and into Tuesday morning, “We are the New Matriarchy” showed me how my current anointing can be deepened to open the body to not only prepare us to be the New Matriarch (whether you are in a female or male body or anything in between), while simultaneously healing the 5 crimes of patriarchy: theft, silencing, rape, greed, and murder.

I took all this into deep soul writing on Tuesday and didn’t get out of the chair for two hours. I couldn’t get up until I had my hands around what this means and what is mine to do. And why it matters so very, very much.

I decided to pray a rosary to ground it all.

I always pray an ancient goddess rosary when a new idea comes through.

I sense that as I pray, walking back and forth in a figure 8 in my living room, I am both saying yes and at the same time completely releasing any thought that I know how to do it. I put the whole thing in Our Lady’s hands and let Her do her magic. She’s very good at that!

But before I started, I went outside and turned on the hose. My garden was looking a tad parched. At the end of each decade, I went back out and moved the hose to another plant.

When I finished the rosary, I felt great. Just great. I was smiling and happy and excited about this new deep mystical event.

I went out to turn off the hose and was greeted by this astonishing affirmation from the Feminine Sacred that is always a harbinger of a big leap forward for me.

This precious couple was clinging to the drainpipe just above the spigot for the hose.

And they were NOT there until I finished grounding my yes with the sorrowful rosary. 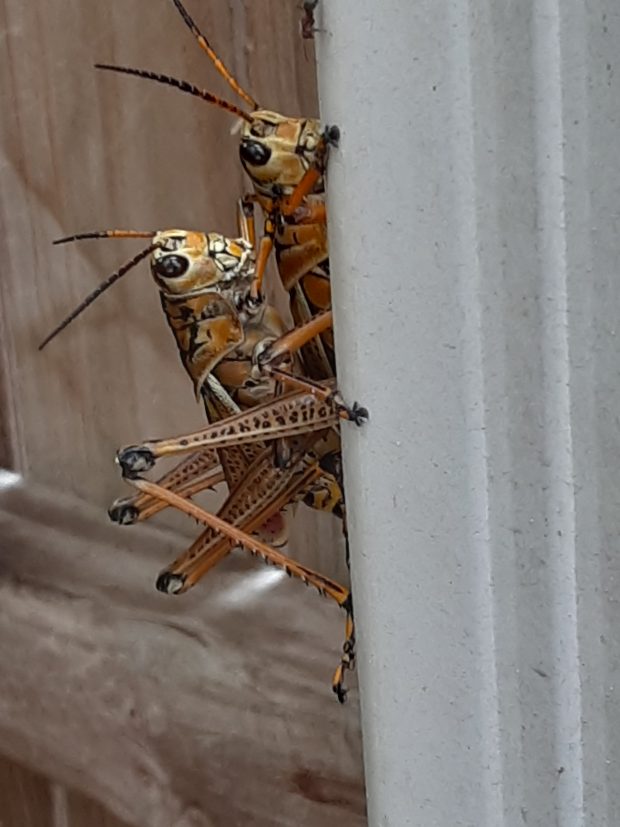 The last time I saw mating grasshoppers, The Return of the Witches was gestating in me. So I yelped with joy at this holy confirmation.

I'm just in the earliest planning stages for We Are The New Matriarchy. It will probably arrive next spring. The same time this Holy Father and Holy Mother's babies arrive.

Until then, there will be three events to complete this year of the body:

This has been an extraordinary year and I am grateful that I get to share each week with you.

Thank you for reading these Notes from the Field and for inviting friends to subscribe.

PSS: I also received a whole new outline to teach deep soul writing. So get your copy of the book and all the gifts now:

Janet Conner Writing Down Your Soul

Spread the love
Posted in Divine Feminine and tagged Jeanne d’Arc, Return of the Witches, writing down your soul
← Why is deep soul writing so radical?A radical proposal for Lion’s Gate →