Who was Joan of Arc? There is perhaps no more mysterious or amazing woman in history. 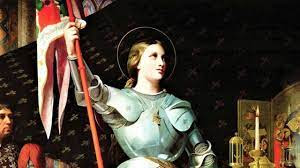 She is the only person condemned by a church court for crimes against religion who was later declared a saint of that very same church. Joan, an illiterate peasant girl, was also the youngest person of any gender to lead an army. Think about that.

Joan of Arc, whose name actually wasn’t Joan, is a source of endless inspiration to novelists, playwrights, actors, musicians, and painters.

Vita Sackville-West, Virginia Woolf’s lover, wrote an astonishing book about Joan in1936. in it, you follow a long trail of documentation that begins in Jeanne’s quiet country life watching the cows, visiting the fairy trees, and listening to her voices.

The voices began to talk to her at 13 telling her she would crown the king of France. It took her four years to finally convinces several key men to take her to the dauphin, the heir to the French throne. In one miraculous encounter after another, Joan gets the armor and army and charger she needs to lead a ragtag army through a war-weary country, free the city of Orleans, and finally get the dauphin crowned king.

And her reward? She is handed over to the inquisition for trial, torture, and death as a heretic and witch.

Throughout her short astonishing life, Joan held fast to the wisdom of her divine voices.

As the court records show, 103 “brilliant” men with high status in the church and government questioned her for days on end in her prolonged trial. Despite being kept isolated and chained in a prison cell for months, she parried their questions brilliantly.

Over and over and over again, they tried to trick her into saying something—anything—they could use to condemn her. Reading her responses, you are left flabbergasted by her brilliance, her audacity, her clarity, her conviction. And don't forget, she was still a teenager and illiterate.

Even the court reporter was amazed. Several times, he wrote “good answer” in the margin. But in the end, the patriarchal powers of the day labeled her a witch and executed her.

But that didn’t stop people from loving her. They saw who she really was. They prayed to her and for her. They invoked her protection. Killing Joan didn’t erase her. If anything, it elevated her to sainthood in the eyes of everyone who could see beyond the church’s censure.

So, who is this woman who inspires such devotion and creativity?

Who was this woman? And, of greatest importance, why is she returning now? And make no mistake, she is returning.

I have spent the last five months in intimate conversation with Joan asking her to guide me to create The Return of the Witches Jeanne d’Arc Listening Pilgrimage coming this summer.

And we’re almost there.

I said yes to this enormous project last December and have dedicated my heart to bringing it to life.

There was just one small problem. Jeanne herself.

In a conversation with Perdita Finn last month, I said, this is Jeanne’s pilgrimage. She is THE greatest mystic witch of all time. She isn’t just one of the 13. She is leading the 13 to return to us and tell their stories. Why? To help us find the courage to create a different kind of world.

As we talked, I suddenly blurted out, Perdita, we need a short intensive to meet Joan!

We need to meet this woman and hear her story and tap her ancient mystical wisdom. It is SHE who will prepare us for The Return of the Witches.

And so here, I am, inviting you to a very different prayer intensive to meet this very mysterious mystical woman.

Our guide is Perdita Finn. You know Perdita as the co-author of The Way of the Rose, which brought the ancient Goddess rosary back to life.

But you might not know that Perdita is also a great expert on the spiritual practice of working with the dead--not just your personal ancestral dead, but THE dead, all dead. She has written a book that will be the seminal book on working with the dead. I hope to announce soon when it will be available.

Learning from Perdita how to work with the dead is probably the most profound mystical practice of my life. It is the dead who set me on this path leading to The Return of the Witches. And to Joan of Arc of course. And now, it is Joan leading the way.

So I think it's accurate to say that although I created this intensive with Perdita. And Perdita and I invite you to join us.

It's really Joan--by any and all her names--who is inviting you to come and explore her mysteries.

This intensive is unusual in several ways:

In perfect synchronicity, we complete this sacred walk with Joan of Arc on May 30, her feast day, the anniversary of her death.

How's that for a kiss of approval from St Joan!

The 15 Mysteries of Joan of Arc

to meeting and falling in love with the magnificent, mysterious, miraculous Joan of Arc!