Friends, soul writers, lovers of prayer, and everyone lining up to welcome 2021,

As we say goodbye to the wild four years of 2020, I’m reminded once more that the numbers themselves hold a lot of wisdom and magic for us.

The four isn’t actually departing. She kicked off a whole decade of four, so each of the next 9 years invite us to explore another aspect of the four. Four is structure.

So until 2029, we have the sacred opportunity to work together to create new structures, new ways of living together with more kindness, more equality, more health, more love. In short, with more of Her living presence.

The numeric vibration of 2021 is a 5. So I’ve been pondering the mystical invitation of the five. And slowly, realizing that the five has been talking to me throughout 2020.

The 5 is change. Divinely inspired and guided change. So if you were hoping the radical changes of 2020 would stop…well, take a breath.

And be not afraid, because the 5 is divinely inspired and guided change.

I began to notice the 5 last April when it became clear that I was being asked to embrace and teach 5 Original Prayers. One of those is the ancient goddess rosary, which has, of course, 5 decades. And, as the cover of The Way of the Rose so clearly demonstrates, the original rose, the most ancient and sacred flower on earth, has 5 petals.

There’s a theme here. And it’s connected intimately to the human body.

Throughout 2020 I led everyone in all my prayer intensives through a sacred anointing of the body that I call “The Garden of Reverence.”

In that anointing, we draw a line of oil up each leg and arm and down from the head: 5 appendages (if you count your head as an appendage.)

When I do this anointing in the mirror, I clearly see Leonardo’s vision of perfection in his Vetruvian Man looking back at me. Only, of course, she’s a woman.

Hildegard knew that. Just look at her magnificent mandala of her Third Vision that she called “on human nature.” 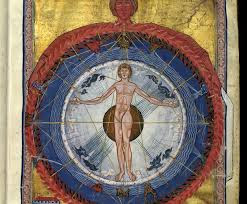 To understand how profound this is, remember that Hildegard was a physician who saw health as the increase of the life force.

I think this is what She was trying to teach me when a rather strange prayer came through last October. It’s called, “She Has a Body.” I’ll be reading it in my 2021 prayer intensives. But here’s how it opens:

She has a body

other gods may not,
they may have only light and law,
rules and judgment, dogma and thought
but She has a body, a most ancient and beautiful bleeding body.

The prayer goes on for two pages describing Her body as the wind, the trees, the rivers, the dirt. And as you. As me. She has a body all right, our bodies.

And with that, this word—body—started to take over.

It showed up in a very intense declaration that ties all bodies together into one sacred whole:

All of this was cooking in me on the morning I recorded the final astrology conversation with Emma Kupu Mitchell for my unusual 2021 Astrology Forecast.

That morning, I was reading The Witch by Ronald Hutton because Sharon Blackie (If Women Rose Rooted) recommended it.

In a chapter laying out the ancient Egyptian legacy of ceremonial magic, Hutton starts to talk about the pentagram that began to sprout all over houses in Europe in the 15th and 16th centuries as a protective symbol.

He ties its appearance in the 1500s back to what was called the “12th Century Renaissance” when “people looked to ancient learning and knowledge of the natural world to bring humans into harmony with the divine plan for the universe.”

And then suddenly he writes:

“Hildegard of Bingen asserted that the human body is constructed on a base formed by the number five, having five senses, five limbs, and five digits on both hands and feet. This made the pentagram an obvious symbol of the microcosm that the human form represented of the divine image in which it was shaped.” (The Witch, p 117)

Not an hour later, I ended up reading this excerpt to Emma in our recording on the numeric vibration of 5 in 2021.

To help me embrace all this sacred potential in this five year, on New Year’s Day, I turned to a book on sacred geometry that until now I haven’t been able to read. It’s intense. And dense.

I confess that when Sacred Geometry for Artists, Dreamers and Philosophers: Secrets of Harmonic Creation by John Oscar Lieben arrived last year, I set it aside.

But on New Year’s Day, I somehow sensed that somewhere in this book, I would find a key to the sacred 5. And sure enough, I found exactly what I was looking for.

“the pentagon [is] the vessel of the golden ratio.”

The golden ratio, 1.618, is the measure of perfection. It is a relationship that repeats throughout your body: it’s the relationship of your finger to your hand, your hand to your forearm, your torso to your entire body, and on and on and on.

The golden ratio is what Leonardo da Vinci used to draw the Vetruvian man. 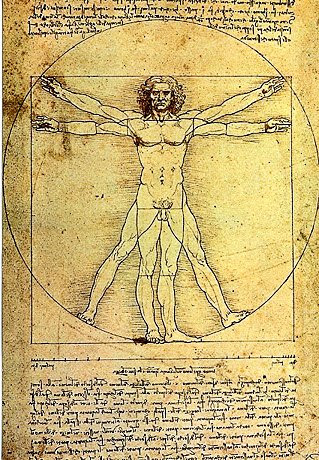 And so did all the classic Greek and Roman artists. When we stare in awe at ancient art, we are staring in awe at the perfection and beauty of the human body. Our bodies.

Could this, at long long last, be the year we fall back in love with being alive, with being human, with having a body?

I didn’t plan a body theme, but when I look at all the intensives I am going to offer in 2021, they are ALL centered in the body.

I am delighted to step into this sacred vessel of the Golden Ratio—Her ratio—with you all year.

The usual 2021 Astrology forecast that Emma and I created is a powerful way to begin.

You get to hear insights from:

After you register—of course the cost is $21—click on the active link on the receipt and you’ll get the link and password for the forecast resource page.

The page will be up throughout 2021, so take your time. Savor these four conversations.

And start dancing. In that holy body of yours!

to realizing that we are the sacred vessel of Her perfection,