What a week! I didn’t think it was possible for so much to happen in such a short amount of time. And I’m not sure I can blame it all on the full moon.

Although Friday the 13th was profound.

As it always is. Because Friday is our day, Her day, the day of the Goddess. And the 13th is, of course, Her number. And then it was a Full Moon, a harvest moon—the queen in her fullness.

A perfect mystical storm set up if ever there was one. And I didn’t see it coming.

The week opened on Monday night with the first session of Healing Your 3 Wombs.

The first womb is your Persephone womb, your maiden womb, your awakening womb. In her honor I put my 17-year-old high school photo on my altar. She with her perfect shiny 1966 flip complete with tiny grosgrain ribbon. Bet it was pink.

I created this intensive. Or, more accurately, I was given detailed instructions on how to create this intensive. And I assumed I understood what I was creating. And how it would unfold. What I didn’t anticipate was how deeply it would impact me.

I certainly intended to dive in. After all, I have an unhealed Persephone womb just like everyone else. But I had NO idea—NO IDEA—just how intense this intensive would be.

On Monday night, Keren Brown introduced us to Persephone by telling us both her stories.

You probably know the Greek patriarchal story of young Persephone picking flowers and WHAM, the earth opens and Hades abducts her into the underworld. Her mother, Demeter the goddess of grain, calls for Persephone but cannot find her. Demeter dissolves into ceaseless mourning. The earth dries up. Nothing grows. Meanwhile underground Persephone refuses to eat. But Hades tricks her into eating a few seeds of a pomegranate which means that Persephone has to return to him for half the year. The story of the seasons of winter and summer.

There is a far older, much more empowered PRE-patriarchal story.

In the original version, Demeter is in charge of both earth and the underground but is consumed with creating fertility on earth, so her daughter offers to go to the underground to assist there.

No abduction. No force. No trickery. Just a brilliant kind generous daughter serving her goddess mother and serving the world.

After Keren told us the two stories, she led us into a meditation to meet Persephone.

Something happened during that meditation.

On Tuesday, I woke in a fog. A deep dark all day fog. All I could do was soul write and read a bit. On Wednesday, I was still weepy but I anointed myself, opened my journal, and began to write.

Now, I’ve been soul writing for 22 years. Deep soul writing has completely transformed my life. Multiple times. I wrote the book, for heaven’s sake. I teach the process.

I was still completely unprepared for what happened.

For this intensive, I suggested members might ask their womb for her special Persephone name and write directly to that name. That’s what I did on Wednesday morning.

Well, my Persephone womb had a few things to say.

And my guess is your Persephone, your younger self, has a few things to tell you as well. (Or your young Hades—who, by the way, is not the bad guy in the original story.)

My maiden womb surprised me by launching into a description of how the skin heals.

Well, the intensive is called HEALING your 3 wombs, so OK, let’s talk about healing.

When you’re wounded, she reminded me, if you don’t cleanse and bandage properly, a scab will form and the surface may look fine, but the deeper layers aren’t really healed.

And that’s the way most of us walk through life. Scarred and scabbed but looking okay enough on the surface to just keep going—and going and going.

Until we rip the scab off. And allow true healing to happen from the bottom.

Well, I pulled off my scabs, dove into my Persephone stories, and didn’t surface until Saturday. I can’t remember the last time I cried this much.

I look over at my Persephone self on the altar beside me and suddenly realize I’m not looking at the camera. Did the photographer ask me to look up to my left? 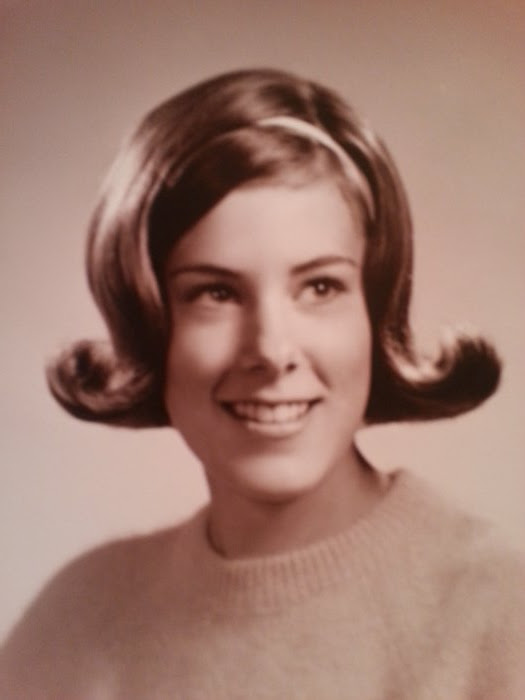 I stare at her and wonder what she sees. Because she does see something. And whatever it is, it makes her smile.

I think Janet at 17 is looking into the future, catching a glimpse of Janet at 71.

We are mirrors now.

I see her. I see her in her beauty, her innocence, her radiant possibility. And she sees me. In my beauty. In my strength. In my creative explosion.

And now, at last, we can celebrate one another. Healed. Holy. And Whole.

to meeting yourself again—perhaps for the first time,

The second session is tomorrow, Monday, Sept 16. If you wish to join us, you can still register at Healing Your 3 Wombs