"Most men have never had to fear sticking out from the crowd far enough to elicit the heart-stopping accusation of 'Witch!' Ancient female wisdom--medical and otherwise--accumulated painstakingly over eons went up in flames along with the 'witches.' How to calculate and comprehend how much European civilization lost when its men nearly annihilated its wise women?"

The Alphabet Versus The Goddess,
Leonard Shlain

Although Writing Down Your Soul is eleven years old, she’s going to have a festive relaunch this winter.

In honor of her rebirth, she’s going to get a new cover and a bunch of new attention. My publisher asked me to write a new introduction, invite someone to write a foreword, and gather a basketful of new endorsements.

I had to think about what I wanted to say in the new intro and ponder who might write the foreword, but I knew immediately who I wanted to ask to write an endorsement.

Tirzah is the author of several important books, including a jewel about the Tree of Life, The Receiving.

Last Spring, her publisher sent me her newest, Wounds into Wisdom: Healing Intergenerational Jewish Trauma. What a book! It was so healing, so powerful, so important, that I asked her to be on Praying at the Speed of Love.

We had a luscious conversation about prayer and the Feminine Divine—Shechinah—alive and breathing through rich mystical Jewish traditions.

During that episode, Tirzah explained that ancestral trauma isn’t an old story. Or a Jewish story. It’s a universal story. And it’s happening right now to Latin American children held in immigration detention centers across the US. Neither Tirzah nor I knew it, but as she spoke, she planted the seed of what became They Are All Our Children.

When we finished recording, Tirzah and I stayed on zoom for an hour, maybe more. We were just having too much fun to stop.

Because she’s interested in healing ancestral trauma, I thought she might like to hear some of my experiences with Ho’oponopono, the ancient Hawaiian prayer of forgiveness.

I told her how that prayer called forth the first man to silence me five thousand years ago and what happened when I forgave him. (Even by my standards, it's a wild story!)

I told her that when my son was struggling to get through the first semester of law school, I screamed at my dead father and dead ex-husband to stop whatever they were doing on the other side and join me in the living room to pray Ho’oponopono. Every morning I yelled at them to pray with me and every morning they did.

You know how this story ends, don’t you? My son not only passed his first semester, he graduated this May.

With each successive story, Tirzah’s eyes got wider and wider. After we hung up, she sent an email with the opening sentence, “You are a witch!”

I stared at the monitor and cried.

I am not afraid of that word.


In The Alphabet Versus The Goddess, Leonard Shlain explains why this is so:

"It is impossible to conceive of the irreparable damage done to the women who survived this protracted reign of terror. No woman alive in the Western world could have been unaware of what was happening. Anyone who actually witnessed a burning would have been severely traumatized. No friendship between women was safe. If a friend was arrested, there could be no guarantee against betrayal under the duress of torture.

"The vast majority of women had no protection. Conducting oneself in a docile, silent, and unobtrusive manner, avoiding female friendships, and sticking close to home and husband was the only way to avoid the glowing pincer's grasp. Modern men have been known to ask why so few women in the last centuries made stellar contributions to the arts and sciences. Most men have never had to fear sticking out from the crowd far enough to elicit the heart-stopping accusation of 'Witch!' Ancient female wisdom--medical and otherwise--accumulated painstakingly over eons went up in flames along with the 'witches.' How to calculate and comprehend how much European civilization lost when its men nearly annihilated its wise women?" 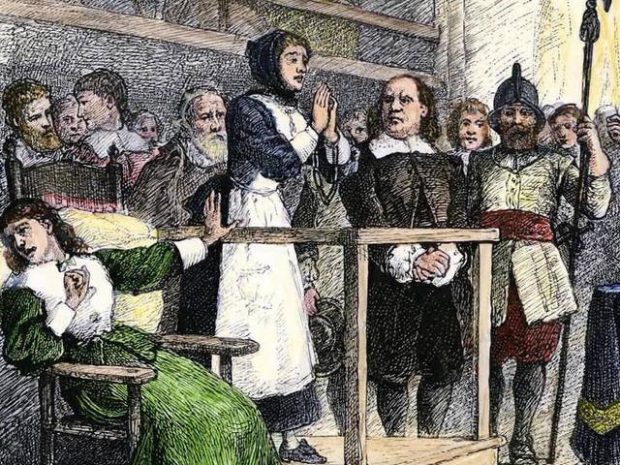 So you might think that being called a witch would frighten me. Or at least hurt my feelings. But no. “Witch” landed on my heart as an honorific. As the highest praise.

Because a witch is a wise woman. A witch is a full magnificent woman who knows who she really is—the living embodiment of the Feminine Divine.

I sat here by myself crying and shouting, “You see me! You see me! Tirzah, you see me!”

And so, when my publisher asked for strong endorsements, I wrote to Tirzah immediately. This is what she sent back:

"Janet Conner, prayer artist, scholar, and 21st century witch, is a spiritual teacher who knows no bounds. In Writing Down Your Soul, she shows us how to transform ordinary journaling into an ecstatic dialog with the Divine. I try to follow everything Janet Conner does because she is always on the cutting edge. She has an outsized talent for nourishing today's profound spiritual hunger with ancient practices, like those found in this special book."

I stared at the monitor and cried. “You see me, Tirzah, my Goddess, you see me!”

And that, you might think, would be the end of this story. But it’s only the beginning.

I sent Tirzah’s endorsement to my agent and she wrote back not to use that term. Not to allow myself to be labeled a witch because that word has so many negative connotations.

I wrote back not to worry. I'll redefine the word. I can do that. I’m already redefining prayer, why not redefine witch.

The two are interwoven after all.

Just two years ago, I didn't know I'd be redefining prayer, never mind thinking about the word witch, but I can’t miss how interconnected the two are.

And I can’t stay silent when both of these sacred words are abused.

I thought my agent would be proud of my willingness and excitement to re-sacralize the word witch. She was not. And so she’s not my agent anymore.

And the funniest thing happened.

I terminated our relationship two Fridays ago. And that night, at 4 am, I was awakened hearing words, sentences, whole paragraphs. I reached for the yellow pad that is always beside me and began to take dictation in the dark.

The next morning as I flipped through the pad, I realized I’d received the opening pages of my next book. A book unlike anything I have ever written or could ever imagine writing. And the dictation has continued every night since.

Every afternoon I type up the next section. And laugh at the mysteries and wonders of life. What else can I do.

What else can any wise witch do?

PS: Now I understand why I didn't offer an intensive in August or September. I didn't know it, but I was being given a sacred block of silence and time to receive this new story.

The next intensive will be in October on a radically different way to look back at all that has happened in 2020 and see it, for the first time, with cosmic eyes. It will be called What Really Happened!

Maybe it's a rather wise-witch offering, but my friends and I are putting together a radical form of yoga called Mother Moon Yoga to honor the Dark Moon and the Full Moon. It's yoga but not like any yoga you've ever experienced before. If you've been in any prayer intensives with me this year, you'll get an email invitation to register in time for the next Dark Moon eve on September 15.

Spread the love
Posted in Divine Feminine, Mystic Witch and tagged divine feminine, goddess, Rabbi Tirzah Firestone, They are all our children
← How to hear the story that healsAnxiety? Disturbed sleep and digestion? Mother Moon Yoga is coming! →