On December 26, 2019, I was awakened in the night with a new prayer, The Queen’s Love—a prayer that I am only now, on this sacred Equinox, beginning to understand.

This is always the way it is. I think I understand something I’ve written. Be it a prayer, a description of a future intensive, or a radical mystical idea, like the 5 Original Prayers. I think I “get” it, but of course I don’t.

All I “get” is something on the surface. Like an intriguing “enter here” sign on a door. Only these doors have the knocker on the inside! It is She who is knocking.

I have only to hear the knock and open the door a crack. Once I step in, the magic begins.

It’s exciting at first, and as I follow Her voice deeper and deeper into the interior, I think I understand what is unfolding. But it’s only when I’ve explored the interior for quite a while—sometimes weeks, often months, even years—that I look back and realize that when I opened that door I had no idea what was waiting for me.

So here I am on the Vernal Equinox of 2021, realizing that this prayer—a prayer I’ve said every day for 16 months—contains a profound surprise that I totally missed until today.

In the wee hours of Dec 26, I wrote what I heard on a yellow pad. When I write in the night, I keep my eyes closed so I can focus on the voice that is speaking. That voice is in me but it’s not me. If it were my voice, I’d be able to anticipate what I'm writing. But come morning, I am always surprised to read what I’ve written.

The words are always beyond anything I could consciously produce. That’s proof it’s not me.

But the handwriting is a surprise too. It’s tiny and squeezed together. I swear when I’m writing in the night, that I’m writing with full loops and spaces, but somehow I never am. Although it can be tough to decipher in the morning light, I think that’s also part of the charm.

Instead of being frustrated by my night scratchings, I see the handwriting as proof that I’m not the writer. I am being written.

So here's part of what I was written that December morning:

She is our beginningless-beginning
She is our endless end

Turning and returning,
we are born and reborn into Love

I thought “turning and returning” was speaking of the rhythm of life-death-rebirth. Many use the term reincarnation to describe that turning, but that word doesn’t speak to my heart. Maybe because it's been co-opted by some religions. I’m not sure why, but to my ear it sounds a little cold, a bit clinical. There’s a touch of judgment in it.

It bothers me that some religions speak of being reincarnated as something undesirable. Somehow coming back in a body is proof you screwed up the last go round.

Tell that to a baby who’s ecstatically playing with her toes. Or a five-year-old chasing fireflies across a summer lawn. Or a young man staring up at a Giant Sequoia. Or teenagers tumbling into love. Or a woman dissolving into orgasm.

This is punishment? I don’t think so.

But, of course, our patriarchal, fear-obsessed religions have relegated anything to do with the body to the bad column.

What if there is no bad column.

What if the body is not only “not bad,” the body is holy, sacred, good. So good that the body is the holy of holies. Because the body is Her. And not just human bodies. All bodies: bug bodies, plant bodies, tree bodies, rock bodies, ocean bodies….

It’s right there in the opening stanzas of The Queen’s Love:

I believe in One Mother
Infinite faces. Infinite Love

The Sun, the Moon, the Stars, the Earth, the Seas
Hawk above, Fox beside, Worm below
Seen Unseen

We are One Body, One Breath, One Love
Her Body, Her Breath Her Love

I didn’t realize it at the time, but The Queen’s Love, which arrived just as Covid 19 arrived, was an “enter here” sign on the most intriguing and surprising door of my life. The door marked “Mystic Witch.”

But I wasn’t ready for mystic witch sixteen months ago. If mystic witch had come right on the heels of The Queen’s Love, I might have been too frightened to open that door.

Instead, The Queen’s Love gently ushered in the ancient memory of 5 Original Prayers, which inspired me to offer four prayer intensives last year:

I see now that those deep mystical prayer intensives got me ready for witch. Just as the labyrinth intensive was ending last August, the word witch arrived in an endorsement from Rabbi Tirzah.

Like any woman in our patriarchal society, I flinched at first. I had to sit with witch for a while. But witch patiently waited for me. By November, witch had evolved into mystic witch and I was ready.

When I opened the door marked “mystic witch,” a lot more doors started opening, until I found myself standing before one marked “The Return of the Witches.”

On a deep gut level, I knew that if I opened that door, everything would change. I opened it anyway. And who did I find standing behind that door smiling at me? Jeanne d’Arc.

That Jeanne is now leading me into the most sacred work of my life: the resurrection of the witches.

When these 13 women across time are restored to life, when they become women again, not just bodies destroyed by patriarchy, then an unexpected miracle happens: we resurrect ourselves.

We resurrect the memory of who a witch really was. We remember who we were before patriarchy demonized our bodies and our sacred arts.

Once I opened that door, books and people and resources came pouring in. I didn’t have to work to find the 13 women for The Return of the Witches Jeanne d’Arc Novena, they found me.

One of the books that dropped into my lap is Witches and Pagans: Women in European Folk Religion by Max Dashu.

Max begins with etymology. Now, as a writer, I adore knowing the origins of words. Witch, it turns out, has a long, multi-cultural history.

“Carry a heavy historical charge, loaded with the misogynist sexual politics and racialized stereotypes of the witch hunts. By insisting on a ‘bad’ definition of witch, they perpetuate misogynist and anti -pagan church doctrines.”

But, thanks to Max's research, we can look back, back, back into the origin of the words surrounding the witches and discover some holy surprises.

Weik is an early Anglo-Saxon word that means to bend, turn, twist, turn. It comes from spinning, twining, planting, and weaving. An interesting additional definition is sacred.

Wich means a bundle of plant fibers like flax or rushes.

“Women twisted them into wicks, which they dipped in tallow and burned for light. turning split willow wants into baskets and other forms made wicker….”

All of this was thrilling to read. Women’s work, instead of being menial and inconsequential, was sacramental, and everyone knew it. The cloth and baskets and knotted bracelets were holy. The reason the church fathers railed against witches so vehemently is that people turned to their holy women for healing, not the priests.

And then this morning I read this:

“The turning motion of a gate or door gave wicket; a turning of time gave rise to the word week.”

And that’s when the lightbulbs popped and I remembered that line, “turning and returning, we are born and reborn into Love.”

THAT’S what the witches knew. THAT'S why the patriarchs came after them. They knew that we turn and return. That everything as it turns and returns mirrors that most sacred mystery of life and death and rebirth. The mystery of the Goddess.

Patriarchy is obsessed with linear thinking and end-of-the-road judgment.

The ancient Goddess truths are far more kind. And it was women who plaited those loving truths into all their sacred womanly crafts.

But where did the women learn that everything turns and returns?

All they had to do was look up. Night after night, eon after eon, the Moon has been turning and returning.

She was our first teacher, our first Goddess. She would appear as a silver sliver on the crescent moon and keep turning until she expanded into the most luscious jewel of the sky, only to dissolve once more into the dark. But then, three days later, she would return again.

Turning and returning. It’s the Moon that taught us this most sacred, mystical truth.

Turning and returning we are born and reborn—just as she is—into love. Not judgment. Love.

I laughed when I read the relationship of the word witch and week—sacred woman and eternal time.

And finally, I understood why I felt so strongly that we needed to have a radically different prayer intensive that begins on a dark moon and continues with the Moon as she moves into her first quarter, then her full phase, and with her still as she wanes all the way to darkness.

Dark Moon to Dark Moon. One full lunar cycle of turning and returning.

And our guide? It could only be April McMurtry, creator of The Moon is My Calendar.

Ten guesses where I first wrote the word witch on August 2 of last year!

At the time, I didn’t think it was a big deal, it was simply something that happened. I didn’t realize that when I wrote that word on my Moon Calendar, I was really writing the “enter sign” on a new mystical door.

And here I am on Equinox, the sacred time of resurrection celebrated in all traditions around the world, finally noticing how the mystical truth of turning and returning that I first heard in The Queen’s Love has blossomed into embracing my calling as a Mystic Witch, welcoming Jeanne d’Arc to show us how to resurrect the witches, and hearing once more the ancient song of turning and returning that the Moon has been signing since before time began.

April and I created this very usual Through the Lunar Looking Glass intensive to give you one full sacred lunar cycle with Mother Moon.

And it's not just any lunar cycle--it's the first lunar cycle of a new lunar year!

Watch the video April and I made for a taste of the magic that awaits when we begin to turn and return in rhythm with the Moon.

We open on Sunday, April 11 at 2pm Eastern with a fun Moon Tea. And close on Sunday, May 9 with another Moon Tea.

In between, we'll gather on 4 Tuesdays from 7-9:15 pm Eastern to begin to develop a loving relationship with the Moon. There will be UK/European watch parties if you wish to watch the gathering with friends.

I sense our sister-witches from long long ago are smiling in anticipation of all of us--female and male--turning and returning to the sacred wisdom we once all knew. 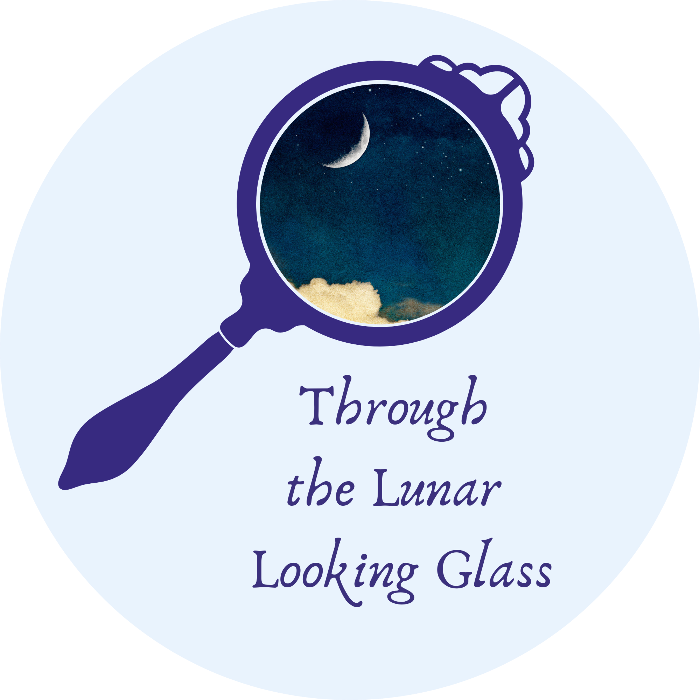 PS: Are you wondering why this intensive has such a weird name? Pop over to the intensive page and find out!

(Weird, by the way, is a witch word with a long sacred etymology!)

Spread the love
Posted in Redefined Witch and tagged Jeanne d’Arc, The Queen’s Love, Through the Lunar Looking Glass, Vernal Equinox
← P is for Perpetrator. But who is the perpetrator?How does seeing time as circular alter your experience? →