None of us knows for sure; we’re all holding our breath. You may not be conscious of it, but you probably haven’t taken a long sweet cleansing breath since you saw a crazed right-wing mob invade the US Capitol.

As shocking as those images were, I had the same response to pictures of the National Guard sleeping on those marble floors a few days later. Those pictures may have been intended to convince us the country is safe, but my hand shot to my mouth, my eyes wide in horror.

The reality of the danger became crystal clear in those pictures of sleeping giants.

And I realized I wasn’t breathing.

It’s a natural biological response to fear to hold your breath till the danger passes. But then, when the imminent danger passes, you don’t return to natural breathing. Instead, you find yourself breathing short shallow fractured breaths.

That’s your body, your holy, precious, wise body, doing all it can to keep you alive by keeping you alert to danger.

If we weren’t willing to see it before, it’s clear now that danger is real. It’s not a political idea. It’s a violent reality. And your body feels it.

After last Sunday’s Notes from the Field, I received a lot of emails. Thank you. It was heartening to hear how you recognized yourself in my letter. Several of your emails left me in tears.

But if the body knows instinctively how to recognize and respond to trauma, it follows that the body knows how to feel safe. How to find the way home.

I found my way home this past week. And my guide was totally unexpected.

Pops was quiet. Very very quiet. And very formal. I never saw him in anything but suit and tie. His one joyful obsession was the Cubs baseball team. I remember being thrilled to be invited to sit beside him in silence listening to the Cubs on the radio. He not only let me listen, but he poured me--six-year-old me--a wee beer in an orange juice glass!

Because Pops was so quiet, I knew next to nothing about him. Aside from the Cubs, I couldn’t tell you what he loved.

I was on a video class with Perdita Finn on working with the dead. I took my first “dead class” with Perdita last summer and have been a tad obsessed ever since.

I guess you could say “dead class” for me is like the Cubs for Pops.

Our assignment was to pick an ancestor we don’t know particularly well and find a project to work on together. I wasn’t sure who that might be.

While another woman in class was talking about her grandfather, I glanced down at the genealogy book my mother made in the 1970s about her Irish-German ancestors and was surprised to see that my grandmother’s photo had moved.

Now, that photograph of her as a young woman in an enormous hat had been held under tight plastic for 50 years, so this did get my attention.

Catherine,” I asked her, “Do you want to work with me?”

I wasn’t sure how I felt about this. Catherine, my mother’s mother, wasn’t the warmest woman on the planet. We lived above Catherine and Lawrence, and my primary memory of her is that she closed the blinds of her living room every afternoon at 3pm and sat in the dark to say her rosary novena. And we children had better be quiet.

But hey, her picture moved. After 50 years. So maybe Catherine had something to tell me.

The next morning, I settled in to read—really read—what my mother had written about her Irish (Cunningham) and German (Koenig) families in a little personal genealogy she wrote for my brothers and sisters and me.

Now, I know from working with Perdita, that the dead see the big picture and they will happily work with us and guide us, but the process may not be anything like we expect.

I read what my mother had written about her mother's life. And it struck me that Catherine came from sorrow.

Sorrow that went back to Ireland and the horrific taxes imposed on tenant farmers. My mother relayed one story about a widowed ancestress who couldn’t pay the taxes and was booted out of her home. And then, the landlord burned the home behind her!

And that was even before the potato famine sent my ancestors and millions of other starving Irish to America.

In Catherine’s childhood in the late 1800's in Chicago, her adored brother died at seven, and a baby brother at three months. And then, Catherine’s mother died at 45 of a ruptured appendix. Catherine at just 14 stepped into the role of mother to her three younger sisters. Catherine would have been a sophomore in high school. But that was the end of her education.

As the “mother,” she not only raised her sisters, she also cared for her bereaved father and her grandparents, all of whom lived and died in the house under her care.

In a poignant anecdote, my mother describes how Catherine sat beside her grandfather every afternoon as he slowly died of tuberculosis, carefully sitting beside an open window so she didn’t contract TB.

Catherine’s story is the story of one death after another. Sorrow after sorrow. Illness after illness.

But she went on to have 7 healthy children with Lawrence, six girls and one boy. And those seven gave her 36 healthy grandchildren all of whom are still alive and well, from the oldest at 78 to the “baby” at 60.

And it struck me that maybe when Catherine was saying those rosaries in the dark, she was really casting a magic spell of health over her family.

If so, she’s quite the prayer witch, don't you think.

Then, I turned the page and read about Lawrence. And burst into tears. I finally understood why Catherine moved her photo so I would stop and read my family’s story.

She didn’t want me to just read her story. She wanted me to meet my grandfather.

And I’m confident she wants me to share what I'm learning from my dead grandparents with you, as we all try to find our way through a frightening time.

They know how to get through, not just the week ahead, but the life ahead.

Let me quote my mother in her handmade genealogy, typed with her forefingers on an old manual Olivetti.

“Dad was meticulous in his dress, never left the house without a hat and always wore his suit coat. When Mother [Catherine] would prevail upon him to take us on the picnics he detested, he would never sit at the picnic table but ate standing and wearing his hat. And to see all of us pile out of the Ford four-door sedan and then produce a picnic basket for 9 people was, we have been told, a sight to behold.”

OK, that’s adorable. But it’s the next sentence that reveals the magic:

“Every night during the World War II years, while our brother, Bob, was in the Navy and our husbands or beaus in the Army or Air Corps, Dad in his suit coat and vest would pray the Rosary for them, pacing up and down in the living room as he thumbed his beads.”

I see so much in that sentence.

First, ten guesses where I pray the rosary. Yes, I pace up and down my living room. Mind you, not in formal clothes, but I do find it humorous that I walk my rosaries just like Pops did.

Thanks to my mother sharing this story, I now know why I walk when I pray. From the moment I started saying ancient goddess rosaries in December of 2019, my body made it very clear that I had to walk my prayers. Just like my grandfather did. He and I pray with our feet.

But the bigger surprise for me in that sentence is the result. The Magic.

My grandfather prayed a rosary every night for four years and everyone he prayed for came home safe.

As I read my mother’s stories, I suddenly saw my quiet, formal, and rather dour grandparents in a whole new light.

Catherine wasn’t a crabby old woman sitting in the dark.

She was a sacred witch weaving the magic of health around her loved ones with her prayers.

He was a formidable prayer warrior guiding his children safely home.

I’m a tad shocked to say this, but it looks like my “prayer artist” and “mystic witch” life purpose aren’t unique to me.

Prayer artistry is in my blood. I come from a family of witches.

Not that Catherine or Lawrence or my parents would ever have called themselves “witches.” That word was anathema to the church and they were devout Catholics.

And what is a prayer?
Ever since “prayer artist” arrived, I’ve played with redefining prayer, freeing it from the oppressive box our patriarchal religions stuck it in.

For me, Prayer is love songs. Prayer is sacred medicine. Prayer is a relationship with everyone who has ever prayed. Prayer is a vibration of love that goes beyond all universes. And prayer is the theatre of the miraculous.

Lawrence pacing the floor—a theatre of the miraculous.

Catherine in her darkened living room—a theatre of the miraculous.

So, now do you know how to move through the week ahead?

Walk and pray, knowing you are praying in the theatre of the miraculous.

Every day this week I’ll be pacing my living room, beads in hand. I don’t say the rosary exactly the way Catherine and Lawrence did. Thanks to Perdita Finn and The Way of the Rose, I’ve altered the words to awaken the living presence of the most ancient Goddess in those prayers.

Together, we are casting a magic spell of protection and grace over me, over you, over this country as it wrestles once more with fascism, and over our whole world as it struggles with illness and fear.

Would you like to learn how to work with your ancestors?

In a few years, you’ll be able to read her seminal book on working with the dead, but until then, join us in the first prayer intensive on the dead.

Enjoy the fun video Perdita and I made. I start by telling you the wild story behind this intensive. And you get a wee peek at my ancestor altar. When we're together, I'll introduce you to Catherine and Lawrence. I bet they'll have some interesting wisdom to share!

We open Tuesday, Feb 2 at 7pm and meet for 3 Tuesdays, followed by a mystical celebration on Sunday, Feb 21 at 2pm. (I alternate the times so you can attend some live events no matter where you are in the world.)

Those mystical celebrations are always a joy, but just think, this time it'll be a crowd of not just our global community, but a whole host of ancestors!

Everything is recorded so don't be concerned about not being able to be live on the calls.

All the details, schedule, registration, and more on this intensive page. 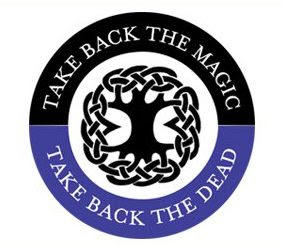 Spread the love
Posted in Mystic Witch and tagged Perdita Finn, prayer, Take Back the Magic Take Back the Dead
← Your body knows what really happened this weekYour dead are calling. Do you know how to listen? →