in which witches start speaking and magic starts flying

The Return of the Witches Jeanne d’Arc Listening Pilgrimage has begun.

We had a profound Opening Ceremony with Sabin Bailey on Friday and met Queen Jezebel at the foot of Mt Carmel on Saturday. And when I say we “met” Jezebel, I mean we met her.

Queen Jezebel came fully alive and spoke to us through her champion, Allison Charron.

Everyone stepping forward to be a story-bearer for the 13 witches is a remarkable woman. And each has some kind of ancestral or mystical connection with their particular witch or with witches in general.

Allison, as perfect divine synchronicity would have it, is not only deeply enamored of Jezebel—keeping Jezebel in a sacred spot on her altar—but Allison is a witch descendant herself.

She might not be related to Jezebel—although at the rate miracles are unfolding in this pilgrimage, anything is possible! But Allison does know that she is the 9th great-granddaughter of Susannah Martin North murdered as a witch in Salem Massachusetts.

Well, I don’t know to whom to credit the miracle that unfolded in our first stop on the pilgrimage.

Maybe it was Susannah. Maybe it was Allison (who’s quite the sacred mystic in her own right), but for sure it was Queen Jezebel herself.

When I invite people to be a champion story-bearer for a witch on the pilgrimage, I simply tell them that for about 20 minutes they are invited to bring the witch to life in a Circle Ceremony. I ask them to help us see the witch in her context: where did she live, what did she eat or wear, how did she worship, etc.

And if we don’t know much about a witch—and we often don’t, and what we do know is written, we must remember, by the people who murdered her—then the champion really has to step into an unknown creative space and make it up. Creative non-fiction, I think they call it.

Well. Allison stepped so deep into the creative non-fiction space that she BECAME Jezebel.

Allison didn’t just talk about Jezebel, she was Jezebel and she invited us to enter Jezebel’s story with her and even participate in the story with a call and response. We were like characters in Jezebel’s play! 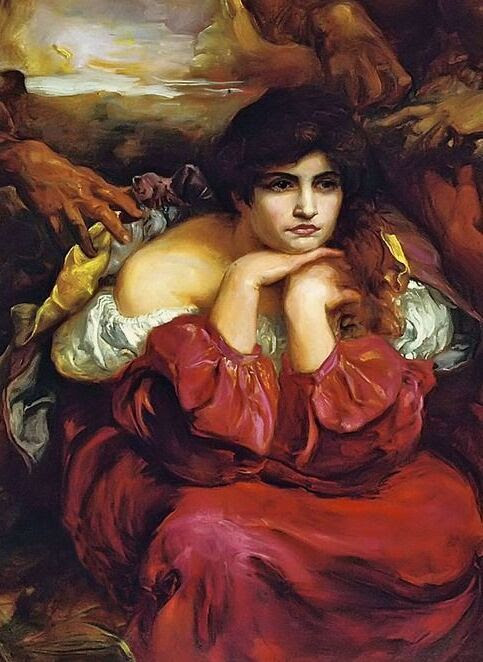 I feel her robes and jewelry slipping over my body. And I hear her. I hear her story, for the first time, spoken by her lips. And it’s not the story her perpetrators ever wanted told.

And that was just the first third of our Circle Ceremony for Jezebel!

What happened to Jezebel isn’t history. It’s still happening to women around the world and our bodies know it.

I’d never done that before. I’d heard of hag stones or witches stones, and that they were magical, but I’d never just sat and held one and waited for whatever wanted to be heard to come through.

There was more, but you get the picture.

When our Circle Ceremony for Jezebel ended, I was inundated with emails and facebook messages that it was the most profound healing experience people have ever had.

I made just one mistake—and it’s a big one. I was so busy creating everything in the final days leading up to the pilgrimage, that I didn’t write this newsletter. So here it is Saturday night and I’m struggling to shift out of such a sacred cosmic space into writing English sentences! If some of them don’t make sense, forgive me.

When you read this, I’ll be recording a bonus video with Queen Boudica’s story bearer.

Like all the champions in the pilgrimage, this woman has a witch-related story. She lives in a castle where two sisters were murdered as witches in the 1600s. And just like our bodies know where the witch wounds are buried, the castle knows where the bones are buried. It knows.

And I am beyond blessed that it was given to me to create.

We’ve just begun and we’ll be walking this pilgrimage for 13 weeks to meet 13 women condemned by patriarchy. 13 women patriarchy thought they got rid of!

But these women remain. And they return. And they ask us to see them and hear them, not as tortured bodies, but as living vibrant women. With a story to tell. And with courage and grace to confer on us as we say yes to creating a world where women and witches and all peoples are safe.

Won’t you join us? When you register I’ll get you access to the recording of the Opening Ceremony and the 1st Circle Ceremony with Queen Jezebel.

And you can experience the magic for yourself.

We meet every Saturday in June, July, and August at 2pm Eastern plus 3 other Sunday gatherings to talk about our personal and collective healing.

And don't worry if you can't be with us live, everything is recorded.

What magic will happen for you? Well, one woman on the pilgrimage discovered that she's Allison's distant cousin! They're both descended from Susannah Martin North.