The last lunar cycle was born in the dark moon days of December 24, 25, 26. During those three days I received clear (if slightly terrifying and certainly breathtaking) instructions on the 9-book cycle that is mine to create in the next decade.

It’s not an accident that this massive assignment and the new decade of 4 are being birthed together.

Four is the number of structure, and it’s obvious to anyone willing to look that our world is desperate for a new kind of structure. We can see the results of the patriarchal power systems that reward a few winners and punish gazillions of losers: appalling income disparity, entrenched racism, environment destruction, horrific misogyny, violence…. The list is endless. The suffering blatant.

We are called now to create a new kind of structure that includes and supports everyone. A structure not of hierarchy and power but of equality and community. The wording I received for this new way of living is “make love visible.”

I’m all in on that. If my books and intensives and ceremonies and prayers and podcast help make love more visible in the world, then I am fulfilling my calling as a prayer artist.

It’s also not an accident that these instructions came during the dark moon days.

In our modern patriarchal world obsessed with linear logic, endless goal-setting, and the relentless drumbeat of performance, we have become disconnected from the cyclical wisdom of the night and day, the four seasons, and the eternal returning cycles of the moon speaking to us in the night sky.

Before the patriarchal religions, we knew and honored the wisdom of the moon expressing herself in every woman’s body. We honored the female body as the goddess herself.

Women knew how to live in alignment with the moon cycles. And the heart of the cycle was the dark moon period stretching from the day before, the day of, and the day after the dark or new moon.

During those three days, women who were menstruating sequestered themselves in a female-only space of quiet, introspection, friendship, nurturing, and prayer. Young women in the community menstruated together in synchronicity with the dark moon. The wise elders cared for them and initiated them into the truths of life.

Together, the women and the moon released anything standing in the way of a full, creative, holy life that served love for the entire community.

I had a slightly different experience!

I grew up in a red brick apartment building in Chicago, utterly oblivious to the moon. I was given one sneak peek, but I didn’t recognize it at the time.

As I was falling asleep, I would fly out of the roof and over the trees to my grade school with the moonlight on my back. No one talked about “flying” or the moon, I just thought it was fun and assumed everyone was flying around the neighborhood. Although, now that I think about it, I never “saw” anyone else out there.

One night at about nine-years-old, I couldn’t get the bed to spin so I could “take off” and my flying days came to an abrupt and sad end. I see now that a sweet seed of moon communion was planted that waited for me to turn 70 and become a prayer artist.

She came calling for me last May when Keren Brown in Toronto held up The Healing Power of the Sacred Woman during the first Mary Magdalene intensive. Keren simply said, “Janet, I think you’d like this book.” I got it, fell head over heels in love, and invited the author, Dr Christine Page, to join me on Praying at the Speed of Love.

Then I learned that Keren had been training with Dr Page for ten years and was certified in the Dark Moon Ritual process! That led to inviting Keren to help create Healing Your 3 Wombs.

From the moment I learned about the Dark Moon Ritual, I began to honor those three days.

I had a moon chart from Emma Kupu Mitchell's spring intensive The Moon and Me. I began to jot down my energy, sleep cycles, and creative impulses and ideas on the chart.

When I got to the dark moon days, I faithfully followed Keren Brown and Dr Page’s directions on how to mirror the wisdom of the moon by releasing blockages on the first day of the dark moon, resting on the second, and opening to receive a creative gift on the third.

I’ve now done the dark moon process six times. And each time I have received a creative seed that I could never, ever have predicted, planned or requested.

The seeds are given. All I, or any woman, has to do is prepare to receive. The Goddess takes it from there.

I love this ritual so much, I asked Keren to help me to create my very first MINI-Intensive.

A mini intensive is a short, focused set of instructional videos, audios, and PDFs that teach one mystical practice in depth. It's all prerecorded so you can watch and listen at any time.

The Dark Moon ritual is perfect for this kind of mini-intensive.

You can start tracking your creativity and energy and anything else you want to track on the moon chart and then as the dark moon days approach, watch the videos for day 1, day 2, and day 3. In addition, Keren recorded an audio-only evocative guided meditation that you can download and listen to on every receive day, 13 times a year.

So today, the second day of a new moon cycle is the perfect day to begin your relationship with the beauty and wisdom of the Moon.

Watch the introductory video, download your first moon chart, and start noticing the moon’s phases and how you feel or what you sense.

It’s taken me six cycles, but I’m now quite aware of the phase of the moon, and I am beginning to really see the relationship of her phases and how I'm feeling or what I'm experiencing under her waxing and waning light.

And now, after receiving six glorious gifts, including Make Love Visible, I believe every woman wants and needs this wisdom.

Keren and I just finished creating this mini-intensive for you. It’s called The Dark Moon in You and it’s available now and always.

I wanted it to be totally affordable AND I wanted it to carry the vibration of four to help us build the new structure, so the registration fee is $44.

When you register, simply click on the active link in the second column of your receipt, and you will get the URL for The Dark Moon in You resource page along with the password. 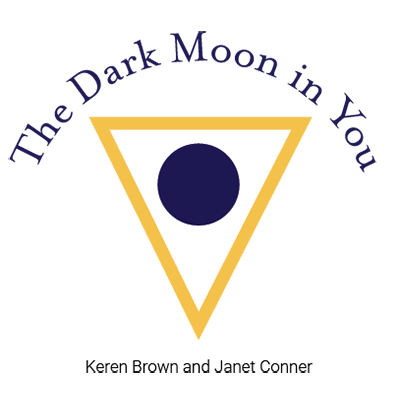 The Dark Moon in You mini-intensive

to living in synchronicity with the unconditional love and creative wisdom of Mother Moon,

Spread the love
Posted in Prayer Practices and tagged dark moon, intensive, New Moon
← The Magdalene calls us to trust in Love again. But how?The Queen’s Love–a mystical prayer for a mystical day →